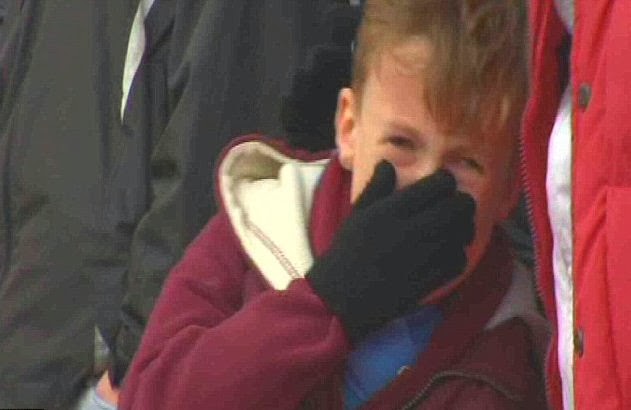 Nottingham Forest opened at 3.20 (11/5) in places for their FA Cup tie versus West Ham United.

West Ham drifted from Evens to 9/2.

Turnover was of a level normally seen in Big Six Premier League clashes.

IN OUR DATABASE OF OVER 80,000 GAMES COVERING TWO DECADES OF GLOBAL FOOTBALL WE HAVE NEVER WITNESSED SUCH PRICE DYNAMICS (WITH VOLUME) AS EXISTED ON THIS MATCH.

Over 50% of the pre-match volume was traded before the West Ham team was made public...
... that was the team with 9 changes and three debutants and a 3 man defence where two players were making their first appearances of the season and the other was a midfielder who had been out for a month. A couple of substitutes were also debutants.

Oh, and a change of goalkeeper.

After losing 5-0, the West Ham hierarchy are offering a VIP package to the child filmed crying during this allegedly competitive game.

Looking at the betting patterns, that is the very least that the club should be doing.

If any one person involved in the match underperformed due to knowledge of the global gamble then we are dealing with match fixing.

When even youngsters know that they are being ripped off, the insider bettors really do not see reality in the same way as the rest of us.

Meanwhile in a parallel universe, Gordon Strachan, the Ladbrokes ambassador (for feck's sake?!), informed us on the ITV FA Cup highlights show: "The fans know nothing."

Which may be the case but at least they know enough to understand that they have just witnessed the biggest insider gamble for two decades and on a terrestrial televised match just two months into The English Match Fixing Scandal...

... even more audacious if it turns out to be match fixing!

IT IS ENTIRELY VALID TO REST PLAYERS...
... IT ISN'T VALID WHEN KNOWLEDGE OF THIS SELECTION SURFACES VIA SOME PEOPLE IN-THE-KNOW AS A COLOSSAL CO-ORDINATED INSIDER GAMBLE ACROSS THE PLANET.

THE INFORMATION SHOULD HAVE BEEN MADE PUBLIC EARLIER SO THAT ITV DIDN'T PAY TO BROADCAST WEST HAM 3RD TEAM AND FANS DIDNT WASTE THEIR MONEY.

FANS PAY THEIR AUSTERITY-BITTEN EARNINGS TO WATCH FOOTBALL - NOT A BETTING SCANDAL UNFOLDING.

THIS INSIDER GAMBLE MASSIVELY DISTORTED AND CORRUPTED THE MARKETS FOR PRIVATE PROFIT.

AND IF THAT ISN'T ILLICIT INSIDER TRADING THEN WHAT THE FECK IS?

BUT THE LIQUIDITY SUGGESTS THAT SOME PEOPLE WERE IN NO DOUBT AS TO THE OUTCOME AND THAT MAKES THIS EVENT SOMETHING FAR MORE SIGNIFICANT.

And even if this is solely an example of sociopathic insider trading...
... in financial markets in Britain, insider trading used to be regarded as a perk of the job before regulation was introduced.
Now people are occasionally jailed for such psychopathy.

Why is insider trading on football seen differently?
Or have we become so inured to the corruption in the game that fans also see insider betting as merely being a perk of the job?

When bookies see such insider volume, the markets should be suspended as they are corrupted. All bets should be cancelled. End of...
Instead, the bookmakers trade it elsewhere for private profit.

And that makes little boys cry!

Meanwhile the authorities focus their concerted attentions on accusing some Black men of getting booked deliberately...

This blog post is no accusation against any individual or grouping of individuals.
But some insiders, those in-the-know, people in the loop, exploited inside knowledge to profit from a compromised market.
Our primary point is that this opportunity should not exist.
It is a loophole.

Bookies pass the knowledge around the world in a pyramid scheme of insider exploitation of the market until some offshore layer is left holding the liquidity parcel when the music stops.

This isn't a legitimate market.
It is a poker play.

But you cannot blame people for exploiting opportunities that come their way...
... it is the infrastructure of the game architected by the authorities that allow this casino to exist.

Until global betting markets are regulated, globally, and there is a compulsion for club officials to make public new knowledge that impacts upon the markets, these farces will recur recurrently.

Football markets are highly liquid global markets and should be treated as such.

If the information had been made public then ITV wouldn't have covered the game, bookmakers would have priced the market correctly, advertisers wouldn't be peeved about viewing figures, the FA Cup brand wouldn't have been tainted and, most importantly of all, West Ham fans wouldn't have wasted their money on a 3rd team game away from home with defeat a certainty.

After all, a debutant, a seasonal debutant and a midfielder who has not played in a month in a three man defence in front of a new goalie still perfecting his English is a given if you are in receipt of the knowledge!


For many more itemised angles on corruption follow us on Twitter @FootballIsFixed
© Football is Fixed 2006-2014
at January 06, 2014

A Wunch of Bankers

A Ludic Abstraction Of Competition