The Planned Matchfixing Of El Clasico

The Assistant Referee who claims that he was told to show bias towards Real Madrid over Barcelona is Jorge Canelo Prieto. 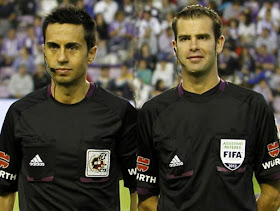 Prieto (left), a man of integrity, wouldn't be welcome at pgMOB or SFA

Prieto registered a complaint with his lawyers over having been approached by the referee on behalf of a senior figure on La Liga's Referee Committee to favour the Madrilenos - it is now perceived in Spain that biased officiating from the match referee is too obvious.

The Assistant Referee also alleges that he received a phonecall from a senior member of the Referees' Committee advising him it would be "intelligent" to follow the instructions for the progression of his career (http://www.telegraph.co.uk/sport/football/teams/real-madrid/11947292/El-Clasico-corruption-storm-as-linesman-told-to-favour-Real-Madrid-by-referee-in-La-Liga-clash-with-Barcelona.html).

As a consequence, the announcement of the match officials for El Clasico was delayed.
Intriguingly, the release of the officials was timed for 21:00 hrs last Tuesday which coincided with the kick off of the England v France spectacle and would have been during the Belgium v Spain match if it had not been postponed.

Prieto has been replaced by Diego Barbero Sevilla but the match referee remains David Fernandez Borbolan.

The La Liga president is Javier Tebas...
... he has recently gone public as being a Real Madrid fan.